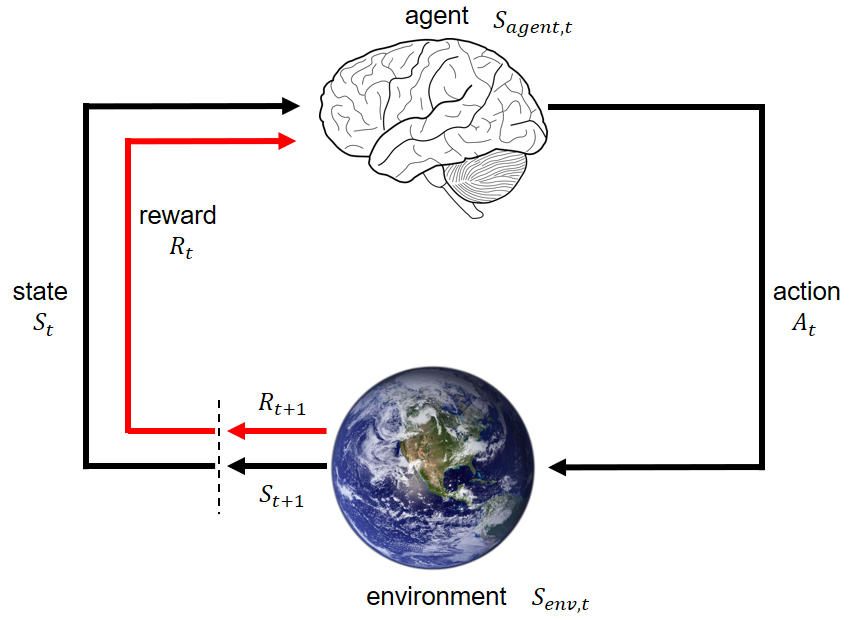 In the previous post,I gave a high-level overview of Reinforcement Learning (RL). In this post, I will summarize different learning paradigms of RL agents.

Objective of an RL agent

The final goal of an RL agent is to maximize total future reward after a series of states and actions.

One assumption in RL is that this sequential decision making process is a Markov Decision Process (MDP). MDP says the future state is completely decided by the present state, and is irrelevant of the previous states. This means in order to decide which action to take next, we only need to evaluate the present state, without the need to remember the whole history. 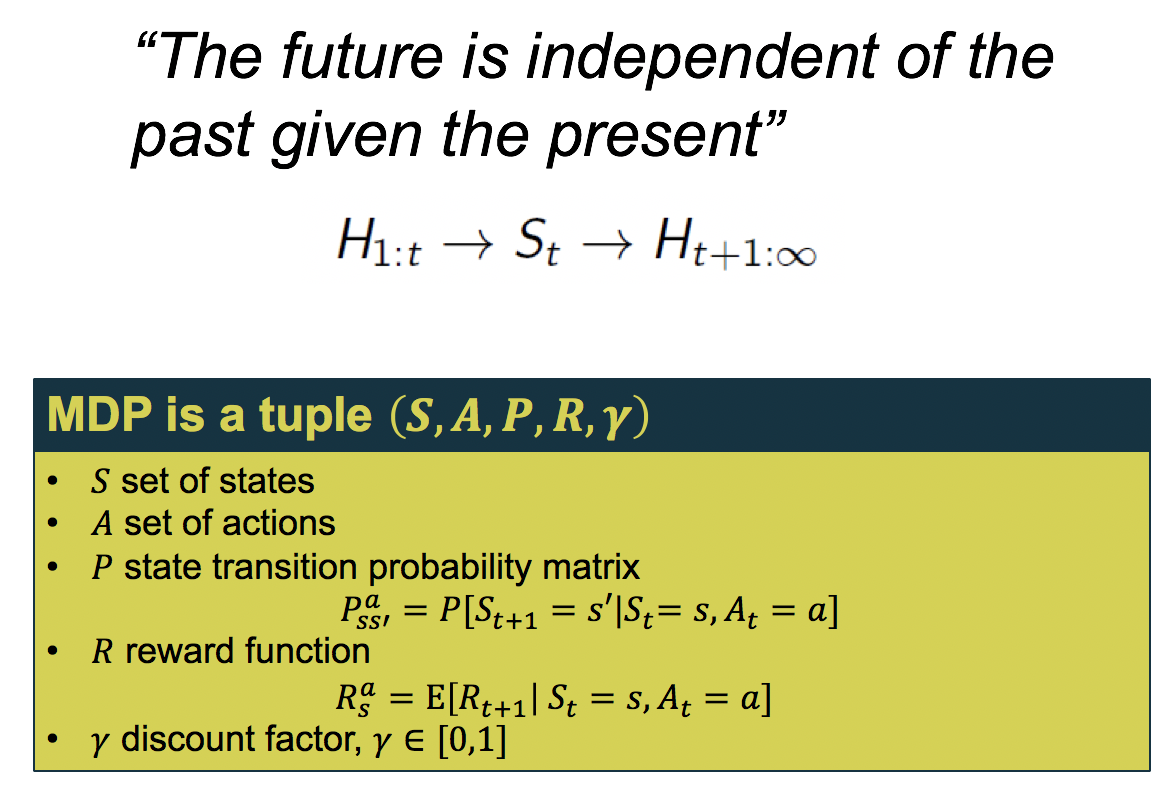 MDP is defined by a 5-variable tuple, as shown above. \(S, A\) capture all possible states and actions the RL agent can take, \(P, R\) captures the effect of the environment on the RL agent, and \(\gamma\) captures the temporal discount of reward over time.

The sequential decision making of an RL agent can be illustrated in the following diagram.

The agent evaluates the goodness of a state using value function. The value function either evaluates a particular state \(v(s)\) or both the state and an action \(q(s,a)\). 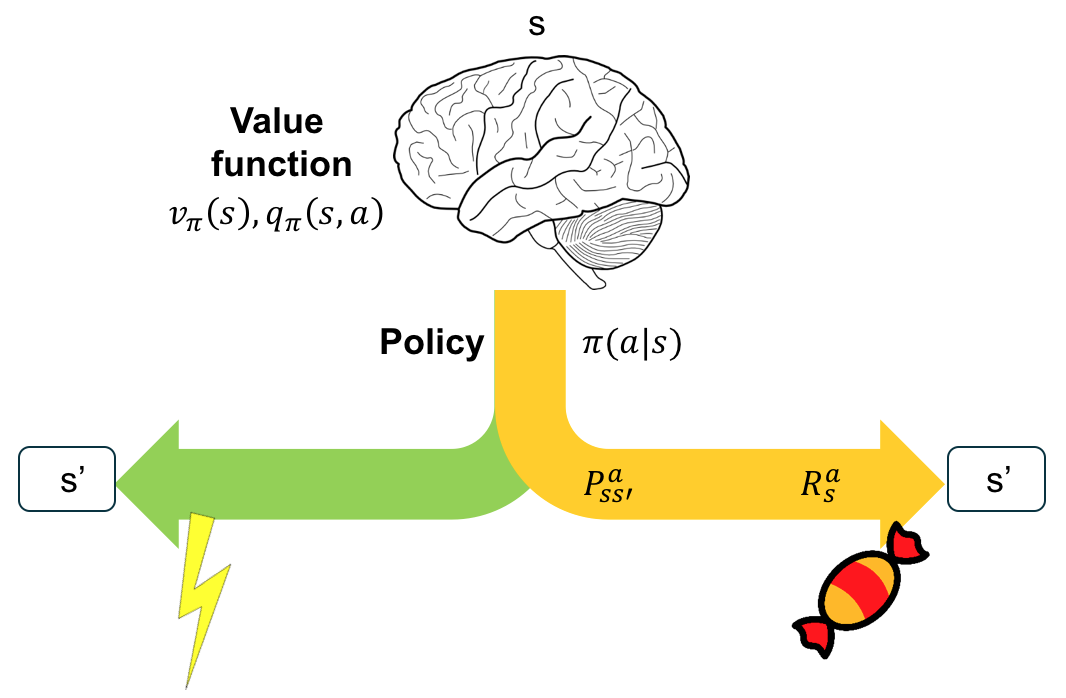 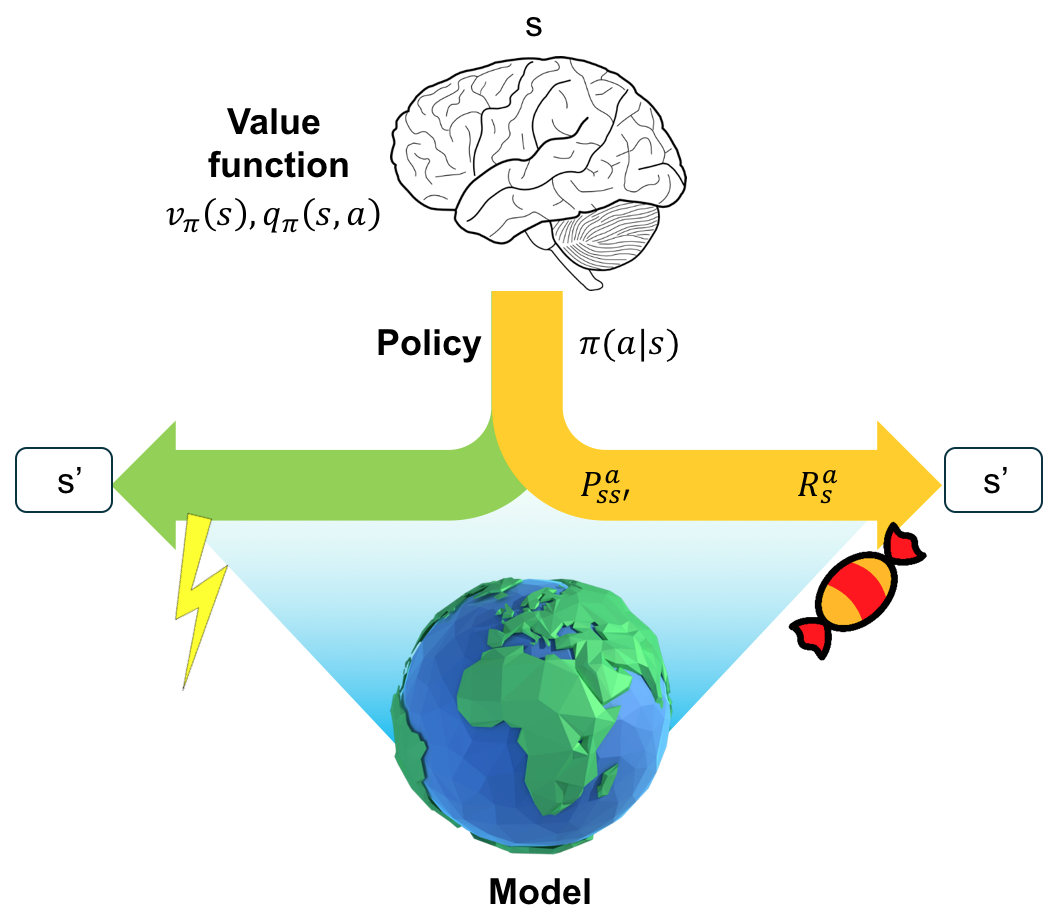 In contrast, an RL agent can learn to build a model (the cartoonized earth) of the environment and use the model to simulate transition probability and reward, without having to go through the actual action and consequences. 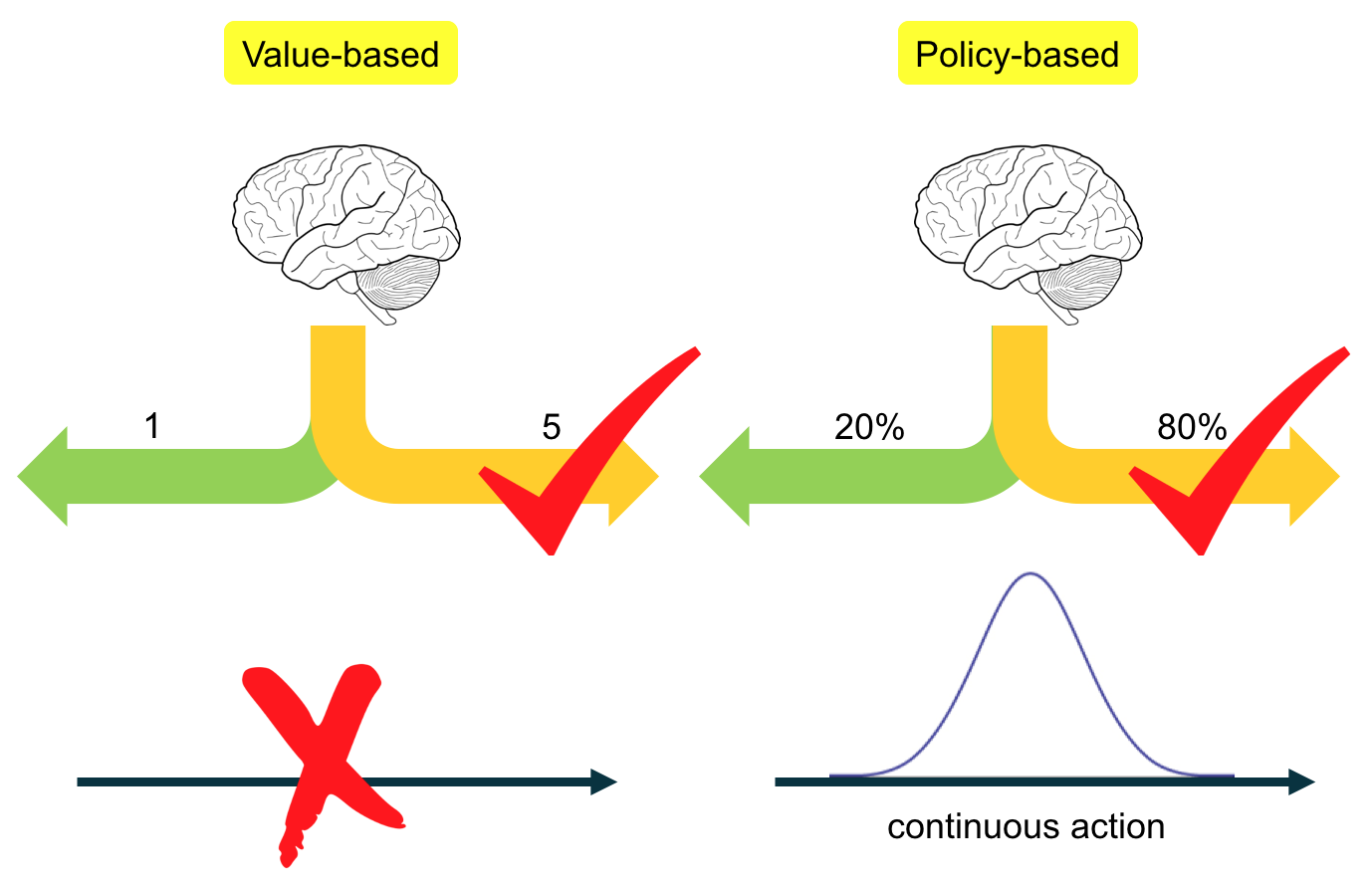 Depending on how the agent decides to take an action, model-free RL is categorized as value-based RL and policy-based RL. 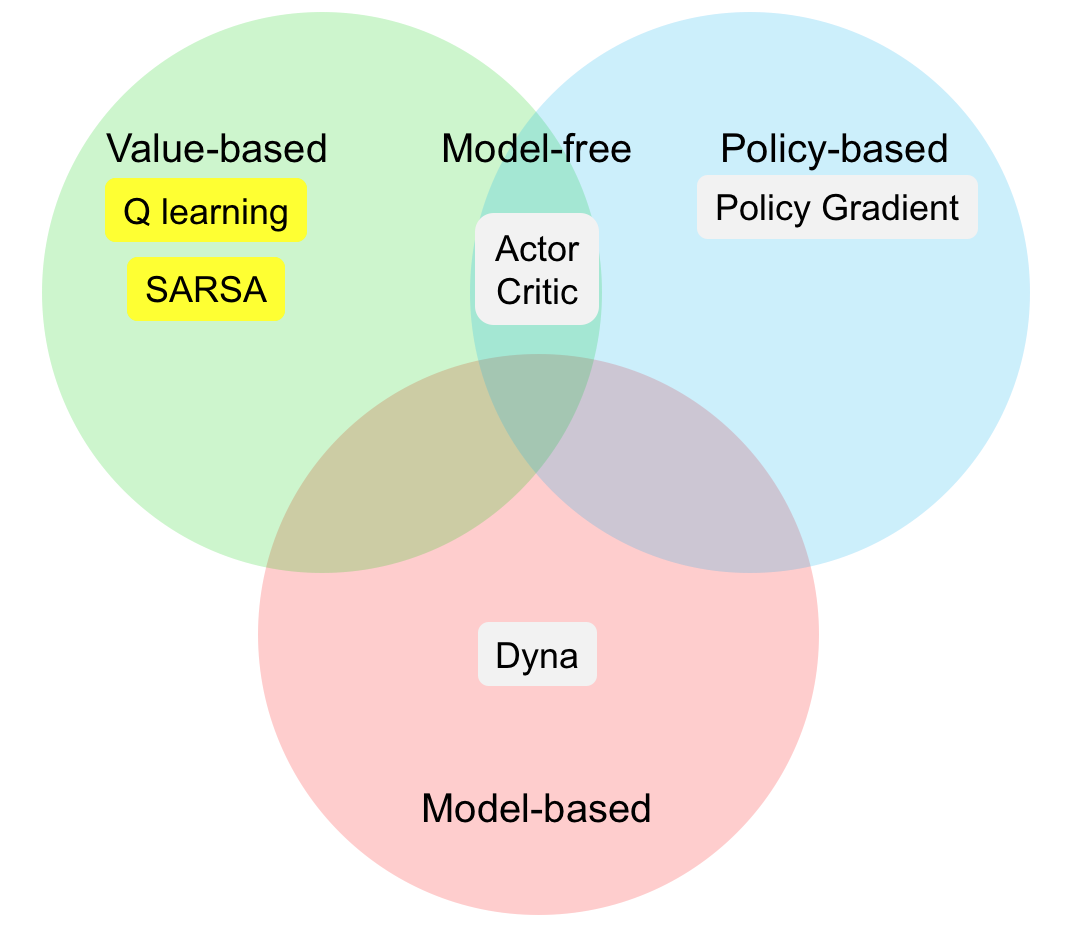 To recap, as shown in the venn diagram above, there are different types of RL agents based on model, value, and policy. Most RL agents are model-free, including value-based and policy-based RL. Each type of RL agents has several classic algorithms which will be covered in later posts. 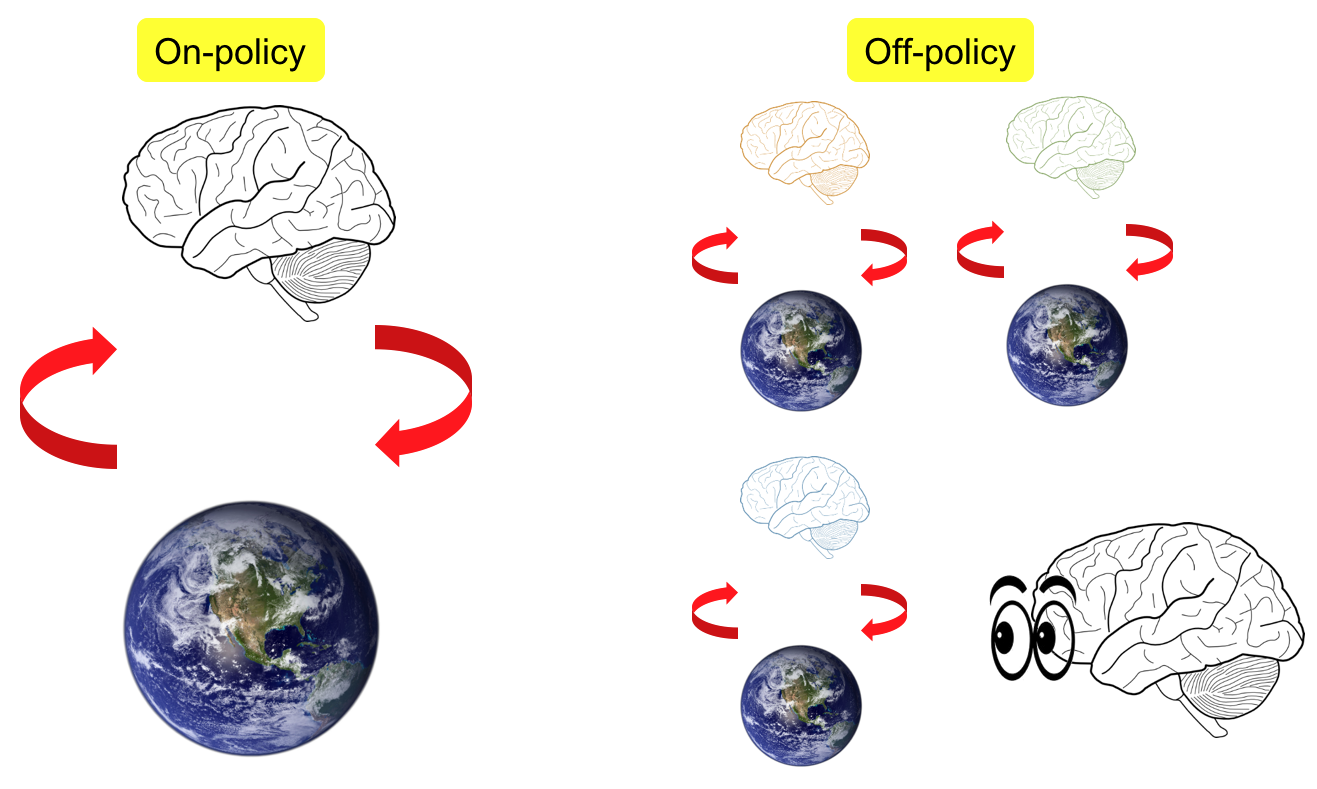 In the next post, I will discuss in detail how model-free RL learns.

Some figures and diagrams in this post are modified from Mofan’s series on RL https://morvanzhou.github.io/tutorials/machine-learning/ML-intro/ and RL course by David Silver https://youtu.be/2pWv7GOvuf0