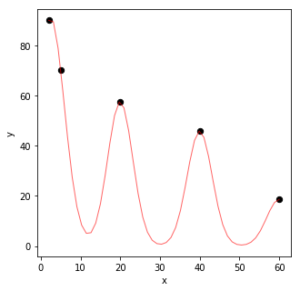 In this very first post of the Connect the Dots series, I set up the supervised learning problem from a function fitting perspective and discuss the objective of function fitting.

This is No.1 post in the Connect the Dots series. See table of contents.

The difference between each predicted output and real output point is captured by loss function \(l \).

The average loss over all data points is usually called cost function \(L \). Sometimes, people also use the term loss function to refer to cost function.

Now the supervised learning problem is formulated as a function fitting problem. There are infinite number of functions in the problem space, as many as your imagination goes, and even beyond that!

In the end, the one and only golden standard for a good function is that it is able to predict unseen data as accurately as possible, in other words, minimize the error for unseen data.

For simplicity, we assume the seen data is representative, and have the same distribution as the real unseen data. We redefine the goal of the problem as minimizing \(L\) for the “unseen” testing data (which in fact, is seen).

Let’s define Error as the following:

The first element, called bias, represents how far the training data performs v.s the best possible one. The function fitting process can minimize this directly.

Variance corresponds to the “generalization” of the fitting function. Our function may have very low bias, i.e. perform well on the training data, however, it may generalize badly on the testing data, thus high variance.

Variance is usually not directly solvable. In order to evaluate the performance of a function on “unseen” data, we usually use cross-validation to assess a fitting function after the training is done. In some cases, we may directly adjust and reduce variance by penalizing complex models. More complex models tend to better fit the training data and have lower bias, at the same time, the more the fitting function depends on the specific pattern in the training data in a complex model, the less well it generalizes. Therefore, we can add a penalty term to account for model complexity. Note that although penalty term is not exactly the same as variance, it captures the intrinsic difference of function performance on training and testing data. Cross-validation represents out-of-sample evaluation of a function, and penalty term (such as in Akaike information criterion) can be viewed as in-sample evaluation of a function. I will discuss more about function evaluation in later posts.

As shown in the example below, as we increase the degree of the polynomial fitting, the training mean squared error decreases while the testing mean squared error increases. The actual function I used to generate the data is \(y = 5 \times x – 3 + 10 \times N(5,3) \) with a Gaussian error.

The bias-variance trade off is ubiquitous in machine learning as whatever pattern we discover from the seen data may not be exactly the same in unseen data.

Eventually, we want a generalizable fitting function that allows us to predict real unseen data accurately. We can do this by choosing the function that minimizes loss on “unseen” testing data.

We use the training data to find the best possible \(f\) by optimizing the objective function which takes into consideration both loss and function complexity.

Demo code can be found on my Github.