In the previous post, I used SQL and Python to clean NYC taxi and Uber data in 2015. In this post, I performed data exploration and visualization using Pandas and Tableau, and present some interesting patterns of taxi trips in NYC.

Taxi is popular in New York

When do people take taxi? 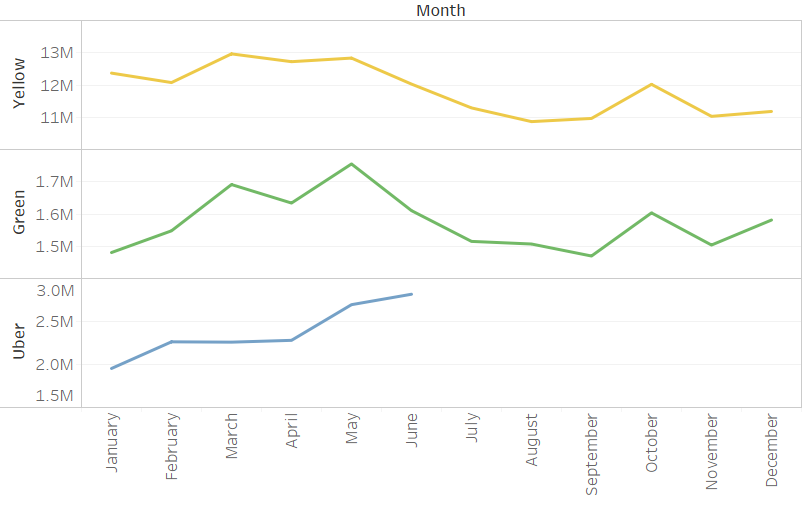 Clearly, Uber was competing with traditional taxi business in 2015.  And now we have many Uber-like car sharing services, and the competition is more intense! How to best capture the taxi market is the crucial question for both traditional taxi and the new sharing taxis.

There were more taxi trips on weekend than weekday. The trend was more noticeable for green taxi: daily trip increased from Monday, and reached peak on Saturday (50+% increase compared to Monday) then dropped sharply on Sunday. Since Green Taxi operates mainly outside Manhattan, it is interesting to check where it experienced the highest increase.

Both yellow and green taxis reached the lowest hourly trip at 5 am. Yellow taxi had another drop at 5 pm, which is probably because 4-5 pm is the time when many taxis switch drivers [3]. Both taxis had a morning peak 8-9 pm and an evening peak at 6-7 pm. This is likely due to rush hour of people going to work and getting off work.

Daily traffic pattern is quite consistent for both taxis on weekdays (Mon-Thur): morning and evening peaks.  Both taxis have highest traffic starting from Friday night and decreasing on Sunday afternoon. In particular, green taxi daily trips increased from Monday and peaked on Saturday. On Friday evening, there started to have more trips and lasted over night.

Where do taxis pick up and drop off passengers?

From the geographical heat map, I discover several interesting patterns:

1. Yellow taxi had heavy pickup in midtown and downtown Manhattan. Green taxi, which is not allowed to pick up passengers below 110th street, had almost zero pickup in Manhattan. 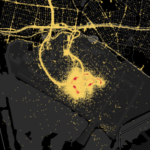 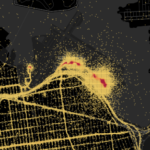 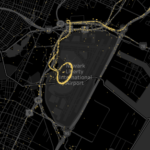 3. Green taxi was most concentrated in Brooklyn and Bronx.

5. There were more pickup and dropoffs on main avenues, such as Broadway.

6. Note there was also high traffic at New Jersey near Hudson river. Since a considerable number of people working in Manhattan are living in New Jersey and commute to work, this high taxi traffic is not unexpected.

Since Green taxi showed very sharp temporal change during weekends, I decided to focus on Green taxi, which mainly operated in Brooklyn and Bronx. I focus on my analysis in Brooklyn. Check my next post.

[1] The iconic yellow taxi is still twice as popular as Uber in the Big Apple, http://www.digitaltrends.com/mobile/nyc-taxi-2x-more-than-uber-trips/