This is No.5 post in the Connect the Dots series. See full table of contents.

How can we find a good fitting function that returns discrete values?

A simple and naive approach

In binary classification where \(y \in \{1,2\}\), we can try to simply treat the output as continuous \(y \in R\) as in linear regression, and find the linear regression coefficient \(\hat \beta\) using mean squared error:

Then we can define a decision boundary as a cut-off. For a given input \(x_i\), we can transform the expected continuous output \(x_i^T\hat \beta\) from linear regression to a discrete output as \(\hat f^{LS}(x_i) \) :

Treating the output as continuous variable, we can fit the data with linear regression (red dashed line), and get the predicted \(y_{pred}\) for each \(x\).

As shown in the following figure, the actual \(y_{train}\) takes discrete values 0 and 1, while the output from linear regression \(y_{predict}\) is continuous. 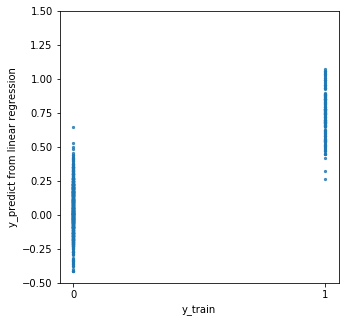 As we can see, misclassification error reaches minimum when decision boundary is set as 0.44.

This decision boundary approach works well for binary classification. What if we have more than 2 classes? Since the discrete output does not have an intrinsic order, it is difficult to fit the data as linear regression directly.

We can apply what we did for binary classification to multiclass if we can transform and encode multiclass as several binary classes. The idea is to use indicator variables (in feature engineering, it is often called one-hot encoding). For a \(K\) class problem with the output response \(G\), there are \(K\) indicators \(Y_k, k = 1,2,…K\) with

For each column in \(Y\), we can fit a linear regression model to get the predicted continuous output as:

There is a serious problem with this regression approach for multiclass classification. Classes can be masked by others, which means there is no region in the feature space labeled as a certain class. Intuitively, this is caused by the rigid nature of the regression approach in Equation 6.2. Certain class \(k_*\) may never generate the maximum regression output. Data that should be classified as \(k_*\) will be misclassified as \(k_{max}\). Masking is not uncommon with large \(K\) and small \(p\). Examples can be found in reference [1] and [2].

As discussed above, the problem of using linear regression for multiclass is caused by the rigid nature in Equation 6.2, in which we pick the class \(k\) with maximum \(\hat f\). We can modify this rigid 0-1 classification into a soft classification with \(\textbf{p}\) representing the probability of the data labeled as a given class.

Again, let’s start with binary class with the response \(G \in {1,2}\). Using Bayes rules, we can get the posterior probability given input \(x\).

Equation 9 is called logit function which is the natural log odds.

Sigmoid function is defined as:

and satisfies the symmetry property

The derivative of the sigmoid function can be derived as following using the chain rule [3]:

\(x_i^T \beta \) is a scalar, thus \(x_i^T \beta =\beta^Tx_i \) . Note that we make assumptions of the linear format in Equation 13 as we did in linear regression. This is not to say the linear combination is the only representation.

Can we use squared error?

Let’s start with the same error function as in linear regression:

\(x_i, y_i\) can be viewed as constant. In Equation 17.2, the first element in the bracket the bracket \(x_i^2\sigma( \beta^Tx_i)(1-\sigma( \beta^Tx_i)) \) is always >=0, but the second element with \(y_i\) is not guaranteed to be non-negative. Therefore, mean squared error for logistic regression is not convex. This means that the solution for the first derivative as 0 is not guaranteed to be global minimum.

Can we use misclassification error?

You may have noticed that whenever people discuss logistic regression, MLE is always brought up as the fitting criterion. The idea is that we want to find a differentiable and convex loss function which allows us to solve the root of first-order derivative as the global optimum.

From Equation 14, we can see the probability/likelihood of a data \(p(G=k |X = x_i)\) can be defined as the sigmoid function:

Thus the overall likelihood of all \(N\) observations can be written as the product of all probabilities:

The loss function can thus be defined as negative log-likelihood:

The total loss is

In order to minimize the loss function (i.e. maximize the log-likelihood), we set its first order derivative as 0:

Now we need to solve Equation 23 to get its root.

Unlike linear regression in which the first derivative has a quadratic format and analytical solution, Equation 23 is nonlinear on \(\beta\) and does not have a closed-form solution. We need to use nonlinear optimization method, such as the Newton-Raphson method.

The intuition of the Newton-Raphson method is to approximate a function \(f\) using its derivative \(f'(x)\) in order to find the root \(f(x) = 0\), in an iterative manner:

Thus we need to use the second derivative of f(x):

Thus we can write the Newton update as:

Equation 31 can be viewed as reweighted least square with \(W(\beta)\):

We can solve Equation 30 in an iterative manner, an algorithm called iterative reweighted least square (IRLS).

What about gradient descent?

In practice, Logistic Regression is usually implemented using gradient descent. This is because the computation of the second derivative Hessian matrix (which is a \(p \times p\) matrix with \(p\) as the number of parameters to be optimized). Equation 30 includes matrix inversion which is computationally expensive. Therefore, from a computational perspective, at high dimension, Newton method is not prefered. At lower dimension, Newton method can converge to a global optimum much faster than gradient descent.

From sigmoid output to a discrete class

Again, we can try different threshold boundaries as we did in the linear regression approach and evaluate which boundary performs the best. Here, boundary is a hyperparameter that needs to be tuned in the model evaluation process, which will be discussed in later posts.

Other discriminant classification methods such as support vector machine, tree-based classification, and perceptron in neural network, will be covered in later posts.

Demo code can be found on my Github.