This is No.6 post in the Connect the Dots series. See full table of contents.

Equation 1.1 is the basic format of an unconstrained numerical optimization problem.

A set of points satisfying all constraints define the feasible region:

The optimal point that minimizes the objective function is denoted as \(x^{*}\):

If \(f(x)\) is convex, a local minimum is also the global minimum.

Convexity is a key concept in optimization. It guarantees a local minimum is also the global minimum. 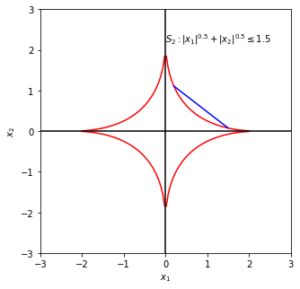 As discussed in the logistic regression post, a twice continuously differentiable function \(f\) is convex if and only if its second order derivative \(f”(x) \geq 0\). In matrix format, it means its Hessian matrix of second partial derivatives is positive semidefinite. That is why we need to use maximum likelihood, rather than squared error as the error function in logistics regression.

As in logistic regression, numerical optimization algorithms are iterative, with a sequence of improved estimates \(x_k, k = 1,2,…\) until reaching a solution. In addition, we would like to go towards a descent direction such that:

The termination condition is defined by a small threshold \(\epsilon\) with any the following format:

1. the change of input is small

2. the decrease of the objective function is small

A good algorithm should have the following properties [1]:

Usually, an efficient and fast converging method may require too much computing resource, while a robust method could be very slow. A highly accurate method may converge very slow and less robust. In practice, we have to consider the trade-off between speed and cost, between accuracy and storage [1].

I first learned about Taylor’s theorem back in college and have been taking its application for granted. While the basic format of Taylor’s theorem is simple, it plays a central role in numerical optimization. Thus, I would like to recap some key ideas in Taylor’s theorem.

The simplest case is first-order 1-dimension Taylor’s theorem [4], which is equivalent to Lagrange’s Mean Value Theorem [5]: 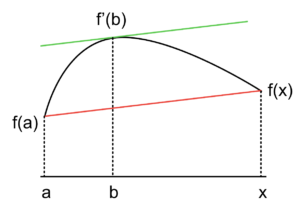 Thus, \(f(x)\) can be approximated by a linear function.

Similarly, if \(f(x)\) is twice differentiable, we can approximate it as:

If \(f(x)\) is infinitely differentiable, such as \(e^x\), its Taylor series in a neighborhood of value \(a\) can be written as the following:

When we only consider the first k-th order of derivatives, we have an approximation of \(f(x)\) as

In practice, we usually expand a function to its 1st or 2nd order derivative to get a good enough approximation of a function.

In matrix format, equation 11 can be written as

Equation 12 can be written as