In the previous post, I introduced Bayesian Optimization for black-box function optimization such as hyperparameter tuning. It is now time to look under the hood and understand how the magic happens.

This is No.12 post in the Connect the Dots series. See full table of contents. 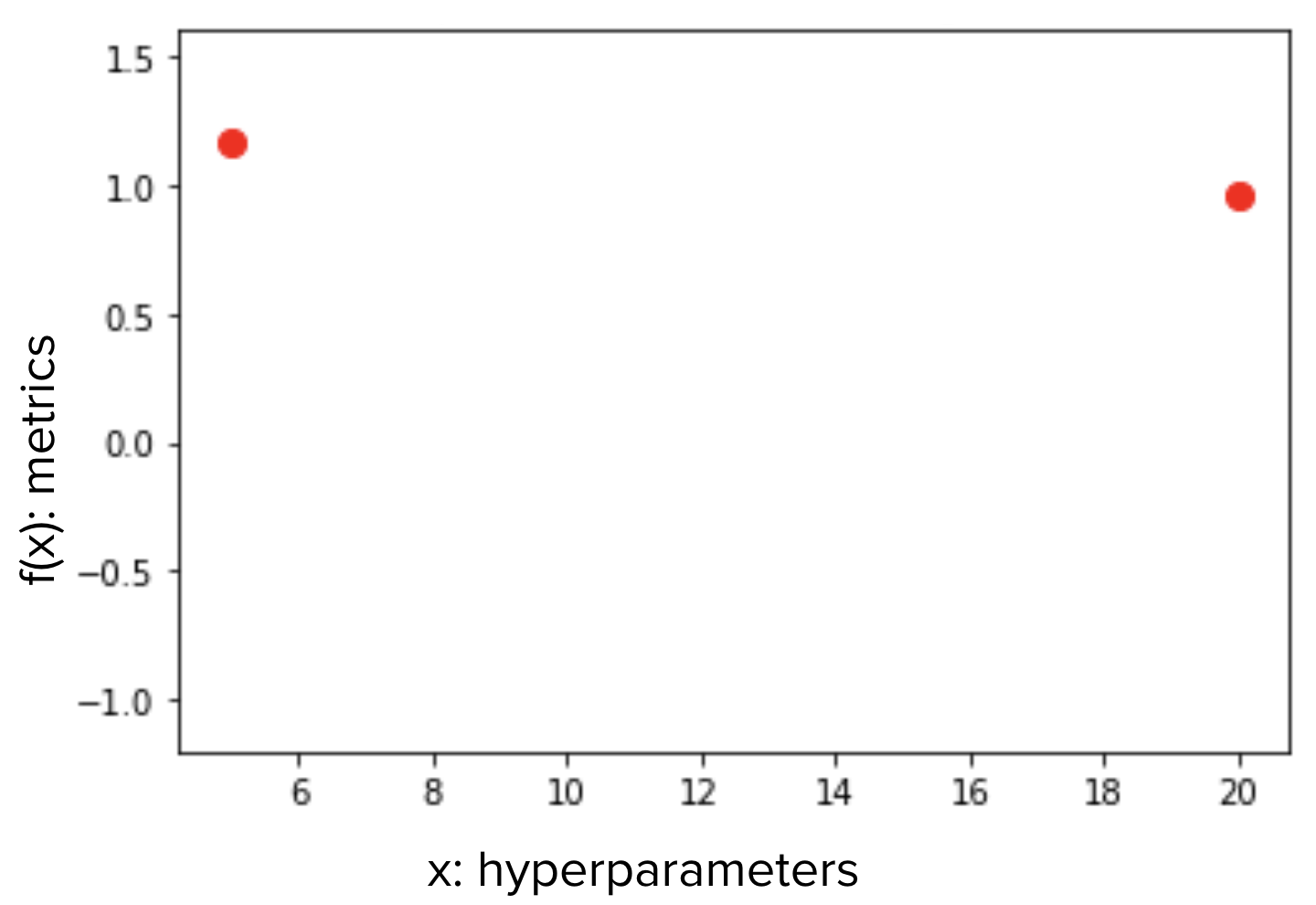 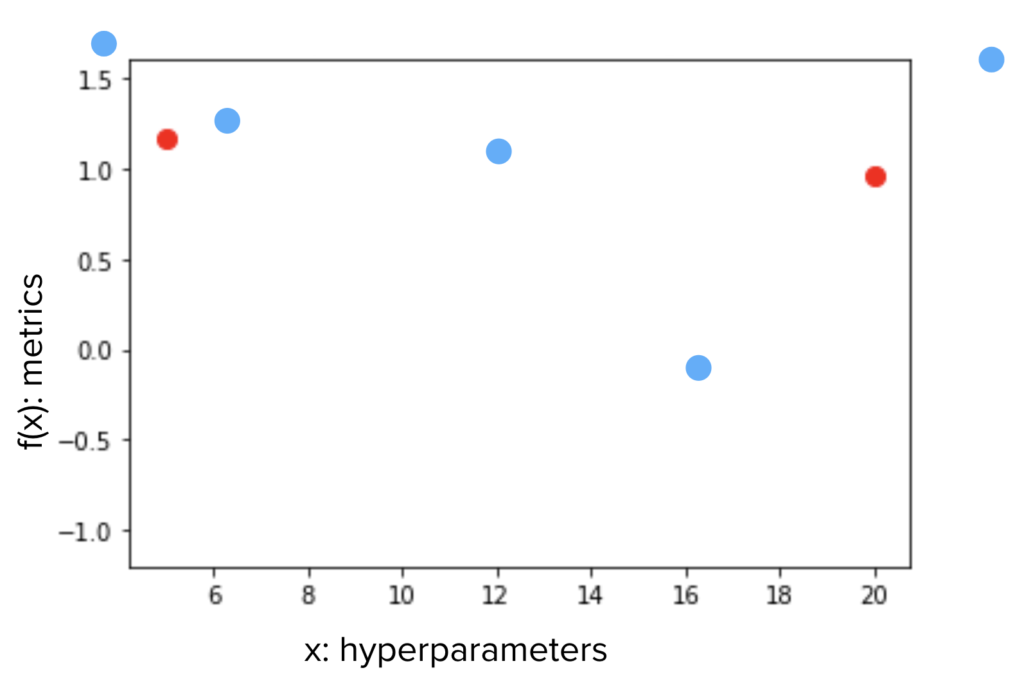 When we are making decision about the next \(x\), we are using what we know to predict what is likely to be. Sounds familiar? Bayesian is coming.

As discussed in an earlier post, to better restrict the search space for fitting functions and to reduce computation cost, most of the time, we make some assumptions about the data and functions. The assumption in Bayesian Optimization is that it assumes the distribution of functions have a joint Gaussian distribution, in other words, it is a Gaussian Process.

The covariance function of a Gaussian Process measures the similarity between input points to predict the function values. In the example before, we have intuitively selected a new point that is closer to the known point with higher value, with the assumption that closeness in input indicates closeness in output.

You can think of kernel as feature map from low dimension to high dimension space \(\Phi(x): x \rightarrow R^x\).

Instead of measuring the relationship between the output function in equation 2, we measure the relationship of the input mapped to a high dimenstion. One important property of kernel is “reproducing”:

Let’s regard \(x, f(x)\) as known measurement from a Gaussian Process, and \(x’\) as unknown input in the same Gaussian Process. What we are doing in equation 11 is to compute the updated function distribution. The updated mean takes into account of the variance in the known data \(K(x,x)\), the distance between the unknown and known data \(K(x’,x)\), and the current known function value. The update covariance focuses only on the input, not function values.

Therefore, with equation 11, we can keep updating the Gaussian Process with more measurements.

We can compute all kernel functions \(K\) in equation 11 directly, however, matrix inversion can be computationally expensive. Noticeably, the covariance matrix \(K\) is a symmetric and positive definite matrix, and thus as discussed in the matrix post before, we use Cholesky decomposition for \(K\).

Note that we add a small identity matrix \(I\) for numerical reasons. This is because the eigenvalues of the matrix \(K\) can decay very rapidly and without stabilization the Cholesky decomposition fails. The effect is similar to adding additional independent noise of variance \(\sigma^2_n\).

In equation 11, we already have an expression for the mean and covariance of the marginal distribution of \(f(x’)\) with estimated mean:

We can then compute the variance of the prediction. Note that variance is the diagonal element in a covariance matrix.

From equation 11, we have the variance as: 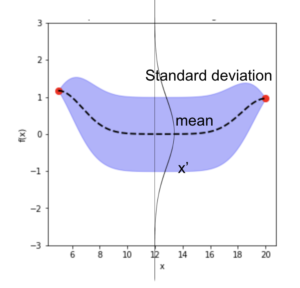 2) initiate with some known training data and unknown test data

4) without training data, compute the prior function distribution 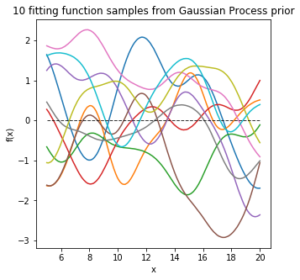 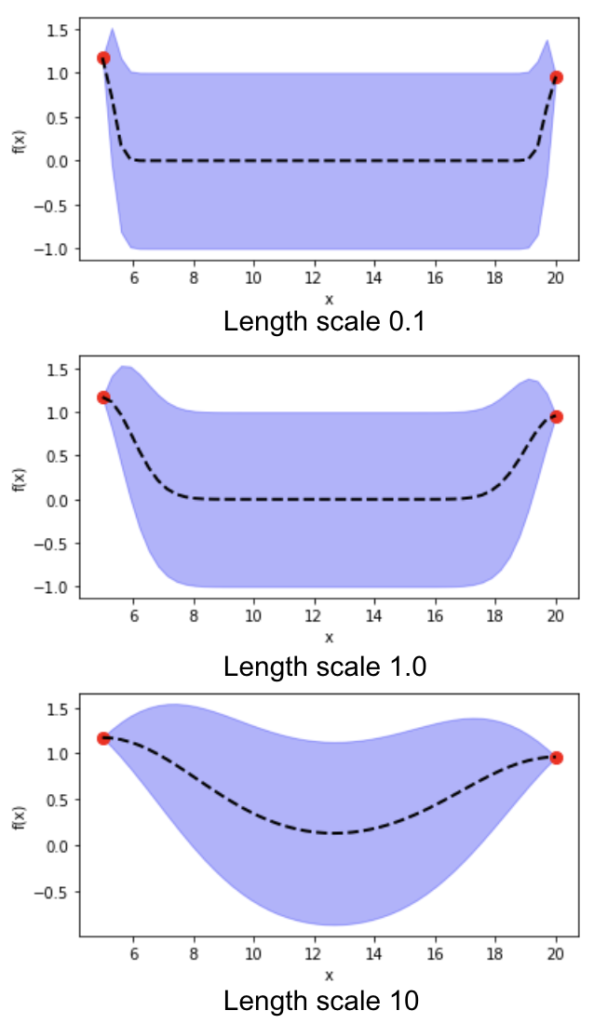 IV. Which point to choose next?

Having an updated Gaussian Process gives us an estimate of the function distribution, but it does not tell us directly which point to choose next. We need to define our own standard.

From equation 11, we have a predicted distribution of function \(f\) with its mean and variance. When we select the next point, we would like to choose a point that has higher function mean (exploitation) and higher variance (exploration). This exploitation-exploration tradeoff is similar to the one we face when choosing which song to listen to: do we listen to the song by our favorite artist, which we always like; or do we take a risk to try something new, which we may or may not enjoy?

An acquisition function \(\alpha(x)\) captures the exploitation-exploration tradeoff. It is typically an inexpensive function to evaluate, and describes how desirable an input \(x\) in evaluating the black box function \(f\), say to minimize \(f(x)\). The problem now is to choose \(x\) that maximize \(\alpha(x)\) [5,6,7].

While \(f(x)\) can be expensive to evaluate (think of training and validating a complex neural net), \(\alpha(x)\) is much faster and cheaper to optimize.

We can use different approaches to define the acquisition function.

In PI acquisition function, we choose the next point based on the maximum probability of improvement (MPI) with respect to the current maximum. As shown in the figure below, for each unknown point \(x_1, x_2, x_3\), we have the function mean and standard deviation (depicted in a Gaussian bell curve vertically). We can easily compute the cumulative probability \(P(f(x) > c), c \in R\) in a Gaussian distribution.

Probability improvement at any point \(x\) can be written as

With predicted mean \(\mu\) and standard deviation \(\sigma\), we have:

To quantify improvement over \(f\), we define

The expected improvement (EI) can be evaluated analytically under the Gaussian Process model [6]:

When \(\sigma(x) > 0\), this point has not been evaluated. We rely on \(\Psi\) the cumulative distribution function CDF and \(\psi\) the probability density function PDF of the Gaussian Process to compute EI.

In practice, we are unlikely to implement Bayesian Optimization from scratch. There are packages we can use directly, such as scikit-optimize. One thing I like about scikit-optimize is that it provides Optimizer class, which has methods \(tell\) and \(ask\). \(tell\) loads previous history of \(x, f(x)\), and \(ask\) predicts the next point to evaluate.

This enables the application of Bayesian Optimizer as a separate step in a machine learning system. For example, we may have a complex multi-stage ML pipeline, various hyperparameters at each step, and convoluted metrics evaluation from different aggregated resources. The Bayesian Optimizer does not care about the details in system architecture. It only needs the historical output \(f(x)\), and input \(x\). While the Bayesian Optimizer here is a Python module, the ML pipeline can be in any language as long as it reads \(x\) – a set of all hyperparameters, and produces \(f(x)\) – such as AUCPR, as shown in the diagram below.